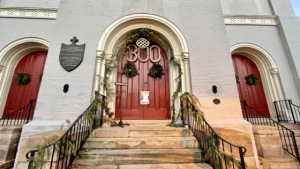 Thank you to all who offered financial gifts in celebration of God’s blessings! We included the names of those who gave and their specified honorees in our Christmas Eve and Christmas Day service leaflets. Since we have received additional gifts after the leaflets were published, we are including the names here. Please join us in celebrating and offering thanks for these gifts, the generosity of those who have given, and the noted honorees.

This list will continue to be updated as we receive more gifts. New additions to the list are in italics.

In Loving Memory of:

We are called to reach out and journey with those we know who are experiencing life transition or crisis. … END_OF_DOCUMENT_TOKEN_TO_BE_REPLACED

As we give thanks for all that God has done for us and for the special people in our lives. we invite you to make a special Gratitude … END_OF_DOCUMENT_TOKEN_TO_BE_REPLACED

St. George’s Episcopal Church will offer a free Chamber Concert on Sunday, November 20 at 3 pm. The concert is part of the church’s Chamber … END_OF_DOCUMENT_TOKEN_TO_BE_REPLACED