You are here: Home / About Us / Contact Church Staff

If you have a pastoral emergency such as a hospitalization, serious illness, death, or other emergency where you need to speak with clergy immediately, please call or text: 540.361.8573. 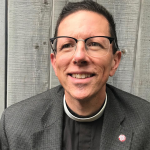 The Rev. Joseph H. Hensley, Jr. (“Joe,” he/him) grew up in Greensboro, NC at Holy Trinity Episcopal Church and attended the North Carolina School of Science and Mathematics and UNC Chapel Hill. A monastery experience at age 23 helped cement his commitment to Christ. He later worked as a professional youth minister and for a community mediation center. Preparing for priesthood, he served at St. Mark’s, Roxboro, NC, Goodwin House (Alexandria, VA) and Church of the Epiphany, Washington, D.C. and graduated (DMin) from Virginia Theological Seminary. Ordained deacon and priest in 2007, he became assistant rector at St. Luke’s, Durham, NC, serving on the Diocesan Council in North Carolina from 2010-2014. Since 2015, he has been rector of St. George’s in Fredericksburg, VA.

Joe is committed to his own work toward justice and healing and dismantling all forms of oppression which inhibit our flourishing as God’s beloved children.

Joe and his spouse of 23 years, Sarah White, have three children, Lucy, Stella, and Owen. He currently chairs the Human Kindness Foundation Board of Directors and has had gigs as a musician, Outward Bound instructor, and performing clown (“Ashes”). He loves singing, playing outside, contemplative practices, and making holy mischief. 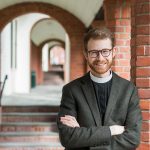 The Rev. Will Dickinson

A Fredericksburg native, Fr. Will was ordained a priest by Bishop Susan Goff in September and is a 2020 graduate of Yale Divinity School. Before seminary, he served Buck Mountain Episcopal Church in Earlysville, VA after graduating from the University of Virginia. While in Charlottesville, he studied theology and music and continues to perform as a bass vocalist and conductor.

Besides Jesus, his passions include history, film, justice, and bringing back wide-brim hats. Recent hobbies include adding even more books to the already perilously tall stacks in his home and irrationally insisting that, yes, it does sound better on vinyl.

As Curate, he serves all ministries of St George’s, especially Grace in Action, Online Evangelism, and Reconciliation. Eager to get to know the whole Fredericksburg community, Will is always up for a good cup of socially distant coffee or a music recommendation. Really. Any excuse for a macchiato. 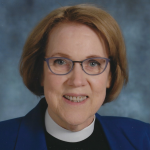 The Rev. Dr. Rosemary Beales comes to St. George’s after moving to Stafford from Alexandria, where she served as interim rector at St. Aidan’s Episcopal Church. She is a graduate of Virginia Theological Seminary (M.Div. 2005 – where her paths crossed with Joe Hensley — and D.Min. 2012). She was ordained in the Diocese of Maryland in 2005 and served for three years as associate rector at St. John’s in Ellicott City, Md., before becoming chaplain for 12 years to the Lower School (Jr. K-Grade 5) at St. Stephen’s & St. Agnes in Alexandria.

Like an increasing number of clergy, Rosemary is a “second-career” priest, having enjoyed a long tenure in journalism in Austin, TX, and DC before seminary. It was sitting with circles of children exploring stories and Christian traditions in Godly Play that led her to leave that career and embrace ordained ministry. After all, she says, “it’s all storytelling. I just found a better story to tell.” As part of the Godly Play international community (a close cousin to Catetchesis of the Good Shepherd), she is a licensed trainer and has also served as consulting editor on the revised editions of The Complete Guide to Godly Play by Jerome Berryman.

Rosemary has been blessed with a son, Casey, and twin daughters, Holly and Shelly, who have rewarded her with seven beautiful grandchildren and a number of grand-pets. She lives with her polydactyl rescue cat, Chloe, and is looking forward to exploring Fredericksburg, particularly parks, restaurants, and opportunities for ceili (Irish) dancing. 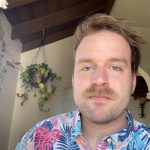 Young Adult Missioner
he / him / his

The Rev. Ethan Lowery (he/him) is an Episcopal priest and a native of Richmond who is very grateful to be back in the land of humidity and thunderstorms, if you can believe it. Ethan is a recent graduate of the Church Divinity School of the Pacific in Berkeley California where he completed a Master of Divinity and also a Master of Arts degree in the area of sociology of religion. His ministry interests include youth and summer camp and multi-generational ministries, preaching, and community organizing. Ethan was involved in his own campus ministry program at the College of William & Mary including serving as the student Senior Warden; his interest in young adult ministry is rooted in being a young adult and having experienced himself the Church not always knowing what to do with 20- and 30-somethings. In his free time, you’ll find him sitting still, lying down, wasting time, poorly tending his plants, or replaying old Nintendo 64 games. You can be in touch with Ethan here.

John Vreeland joined St. George’s in 2005 as Director of Music Ministries. John holds a Bachelor of Science Degree in Music Education from Nazareth College in Rochester, NY and a Master of Music Degree in Organ Performance from the University of Buffalo.
He serves as parish organist, arranges and composes music for choir and instrumental ensembles, and directs the Choir of St. George’s, Jazz Ensemble Choir, St. George Voices, Chamber Ensemble and Jazz Ensemble. He also provides support for the Adult and Children’s Hand Bell program, Celtic Ensemble and children’s music program, and serves as artistic director of St. George’s Chamber Music Series.

John lives in Fredericksburg with his wife, Mary, who is also an active participant in St. George’s music program. When he isn’t practicing, he enjoys, cooking, gardening and cycling around Fredericksburg.

Assistant Director of Music Ministries
he / him / his 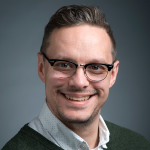 Achim Loch joined the St. George’s community as Assistant Director of Music Ministries in 2016. Achim is originally from the Saarland, Germany, where he studied organ and piano performance, liturgy, hymnology, and music history as part of a certification program. For twenty years, he worked for the Lutheran congregations in Friedrichsthal, Fischbach, and Kölln. In addition to his organ studies and certification, Achim completed a Master’s in American Studies with Minors in Theology and English Linguistics from Saarland University in Saarbrücken, Germany. He lives in Fredericksburg and works for the Global Education Office at George Mason University.

Lisa Bogardus joined us as Hand Bell Choir Director in 2003. An accomplished musician, she plays clarinet and saxophone with the St. George Jazz Ensemble and clarinet with the Chamber Ensemble, also singing alto with the Choir of St. George’s.  Lisa also serves as non-stipendiary Music Administrator for St. George’s music programs, where her duties include music library maintenance, instrumental arranging and choral conducting.

Ben Hicks joined our staff in 2007. His primary areas of ministry are Finance, HR, Insurance, Contracts and Facilities Infrastructure. Contact Ben for any financial inquiries, including changing your pledge or payment requests.

Born in Fredericksburg, Ben received a BA at Davidson College in History and an MAE at Wake Forest. After his education, he spent 6 years as a teacher in Winchester City Schools and then 22 years at the National Bank of Fredericksburg in credit, loan review, compliance and network administration.

Parish Administrator
she / her / hers 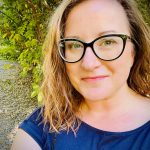 Laurel Loch joined the staff at St. George’s in February 2018. Laurel has a background in technical writing, communications, and publicity management. Laurel has had numerous articles published by the national press, written technical articles presented at national conferences, and edited company e-newsletters and a technical blog. Additionally, Laurel has numerous experience working for non-profit organizations, managing their public relations, serving as a grantwriter, and administering day-to-day office procedures.

As parish administrator, Laurel manages all print and digital publications at St. George’s, handles facility reservations, and is responsible for the general administration of the parish office. Contact her for room reservations, announcement submissions, and questions about the website or Sunday bulletins/announcements.

Director of Newcomers, Fellowship and Membership

Jan Meredith joined the staff as a non-stipendiary staff member in 2002. Her first assignment was working on a pictorial directory. From there she began working in the office an afternoon a week, which quickly turned into several afternoons, which turned into almost a full time staff member. She is the Director of Fellowship, (hosting many events in Sydnor Hall), Director of Newcomers (welcoming our newest members and orientating them to St. George’s), Director of Membership (Keeping records up to date, requesting and sending letters of transfer.) Contact her for updates on contact information and membership changes. You will most often find Jan in the Sydnor kitchen preparing for a reception or baking cookies and other goodies for Sunday morning Coffee Hour. She is referred to as Momma Jan or Granjan to many of our parishioners.
Jan lives in Fredericksburg with her husband Tom, who is also very active at St. George’s.

Barbara Miller-Richards joined the St. George’s staff in March 2018 as parish secretary.  Prior to joining the staff at St. George’s, Barbara was Vice President at an insurance trade association in Alexandria, Virginia.   She has lived in Europe and worked for Ford Motor Company as well as taught for Central Texas College’s European Campus.  Barbara has served on the Fredericksburg City School Board and currently serves on the CASA Board of Directors.  She graduated from Meredith College in Raleigh, NC and lives in Fredericksburg, with her husband and two daughters. 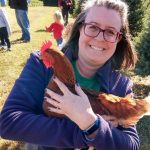 Danielle Davis joined the staff at St. George’s as Preschool Director in the Fall of 2015. Danielle lives in Spotsylvania with her husband Brian, daughter Sandi, and puppy A.J.  The Davises have attended St. George’s since 2013, and enjoy being involved in many different ministries in the parish.  Working with the 3-5 year-olds is definitely her favorite.

Danielle’s educational background is quite eclectic, with each degree or certificate serving a unique facet in her current position. She earned a Bachelor’s of Mechanical Engineering from Gannon University, an Associate’s of Arts in Religious Education and Lay Ministry from Mercyhurst University, a Professional Business Certificate from the University of Mary Washington, and a Career Services Certificate in Early Childhood Education from Germanna Community College. She has also completed the Level I Training for The Catechesis of the Good Shepherd.

Nicholas Perron joined our staff in January 2014 as our part-time Facilities Manager. He handles all light maintenance requests, which are coordinated through the office. He also provides audio-visual support for church services and events.

Riley Mullen joined our staff in 2018 as a part-time Facilities Manager. He handles all light maintenance requests, which are coordinated through the office. He also handles most of the painting and touch up work in our building.

Director of Playtime, Snacks, and Mischief 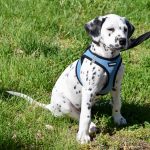 George joined our staff in 2022 and currently serves as the Director of Playtime, Snacks, and Mischief. He is responsible for welcoming all in the Love of God – and he does so with a wagging tail and wet nose. When he’s not receiving belly rubs, you can catch him thoroughly inspecting the grounds by sniffing every corner of the building. We may be slightly biased, but George really is the bestest boy!

We are called to reach out and journey with those we know who are experiencing life transition or crisis. … END_OF_DOCUMENT_TOKEN_TO_BE_REPLACED

Laurie Rose Griffith and Peter Mealy will perform a concert with John and Mary Vreeland on Sunday, April 24. The concert is at 3 pm at St. … END_OF_DOCUMENT_TOKEN_TO_BE_REPLACED

St. George’s Episcopal Church will offer a free Chamber Concert on Sunday, March 20 at 3 pm. The concert is part of the church’s Chamber … END_OF_DOCUMENT_TOKEN_TO_BE_REPLACED