You are here: Home / Stewardship and Giving / Trustees, Trusts and Endowments

“From the time the donor or testator provides that income should be available for the use of such trust, the net income shall be annually devoted perpetually for the use and benefit of St. George’s Episcopal Church, Fredericksburg, Va. Such income shall be available for the following purposes and expended under the direct supervision of the Vestry of St. George’s.”

The overall purpose of the Fund is to provide a general endowment fund that will ensure a firm financial foundation for the Church and provide additional funds for Church programs, outreach, and capital additions. It is not intended that the Fund supplement the annual operating budget of the Church for current expenses that are strictly administrative or operational in nature. Specifically, the funds in the Fund shall not be co-mingled with any other Church funds.

In October, 2002 the members of the Vestry voted to abolish the Rectory Fund and transfer the assets to the St. George’s General Endowment Fund to be used for Parish capital needs related to current and future physical plant. It was first funded in October, 2004 when the Church transferred the $236,201 “Rectory Fund” into it. The “Rectory Fund” originated with the sale of the Church’s rectory on Cornell Street in Fredericksburg.

The Fund will supply 5% of the three year average balance in the fourth quarter each year to be used for outreach ministries, programs of the Church, and capital additions / improvements. A greater amount may be distributed upon affirmative vote by three-fourths of the Vestry, three or more of the Trustees, AND a majority of the congregation.

The Trustees recommend projects for Vestry approval, usually for the December Vestry meeting. Funds are disbursed in December. Organizations may request funds for a project by submitting the GEF_Request for Funding_112019_FINAL.

The Herndon Memorial Trust Fund, established in the 1950’s, is administered by St. George’s Episcopal Church, and was made possible through the generosity of John W. Herndon during his lifetime and by bequest upon his death. The Trust exists to offer needs-based funds for medical assistance to elderly men (aged 55 and older) of the St. George’s congregation primarily and of the greater Fredericksburg community. The mission of the Trust and the hope and wish of the Committee and Vestry which oversee it is to help relieve the financial stress and worry that often accompany illness or change in income status.

The Trust has funds available to assist members of St. George’s parish and/or the community who meet the gender, age, and income requirements. St. George’s members are encouraged to help identify eligible men and assist them, if necessary, in making application.

Applicants are requested to complete the application and submit to Parish Administrator Laurel Loch. If possible, applicants should include a treatment plan with estimated costs. 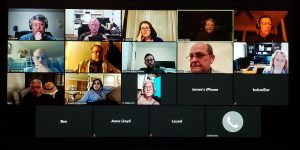 During this season of connecting in new ways, we invite you to watch online or dial-in with your phone. Here’s our weekly worship and fellowship offerings.