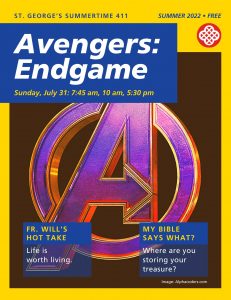 The Rev. William S. Dickinson gave the below sermon on July 31, 2022. This sermon is part of St. George’s Summer Pop Culture Sermon Series. Unfortunately, we were not able to livestream the worship service that Sunday, so we are providing a transcript of Fr. Will’s sermon. Additionally, our Assistant Director of Music Ministries has provided a recording of the special music interlude he played to introduce the sermon.

In all fairness, if a giant, interdimensional, purple-headed tyrant had recently arrived on your superhero-infested planet, snapped his fingers, and instantly disappeared half of all beings in the universe out of existence, you too might feel a little bit depressed.

Alright, let me back up.

If you hang around me long enough, you’ll end up hearing two things:
1) It’s hard to be a human.
and
2) God’s Grace isn’t earned, and it’s enough.

Now, neither of these things is particularly interesting, nor is either of them new wisdom, but that’s just sort of how the Gospel goes. Humans are humans, and always have been, unfortunately. In fact, it is such a ubiquitous truth that to live on this planet as an incarnate human is a difficult task that people have been complaining about having been born since…forever.

So with apologies to Gen Z, I’m afraid you all did not, in fact, invent existential dread.

One of the great aspects of Scripture is how we hear within its pages the whole of the human emotional gamut.

Outnumbering all of the very pious people saying very pious things are the writers of Scripture who are, in a word, upset. Much like us. And the weird thing is, God can do incredible, transformative things through them, too.

For every Mary, mother of Jesus who sings her assent to the trials of her life, there’s a dozen James and Johns, who are annoyed by leaving the comforts of home, or Peter, literally betraying Our Lord out of fear and grief. In half of the parables, even, Jesus shows us people who have lost their way that God uses to do great things. Remember, the prodigal son doesn’t earn back the money he squandered before his father welcomes him home with open arms.

Scripture is full of people finding it hard to be a human. And none more so than the writer of our first reading. Now unfortunately this is literally the only time we ever hear from Ecclesiastes in the entire three-year lectionary, so we’ve got to make it count.

“Vanity of vanities,” the writer says, “all is vanity!” “I hated all my toil…under the sun, seeing I must leave it to those who come after me – and who knows whether they will be wise or foolish!” In other words, “nothing matters.”

Being a human has always, always been hard, and sometimes the only thing to do about is to shout to God about how nothing seems to matter. And the great thing about God is that we don’t have to protect anything from Her. God can handle whatever we throw, and boy do we sometimes need to throw it.
Because, say it with me: “it’s hard to be a human.” But that doesn’t stop God from using us to do marvelous things.

This truth is so universally acknowledged that it even finds its way into Marvel superhero movies! That’s right, it’s Avengers day in the last week of our pop culture sermon series, and we’re talking about Thor’s grief.

Thor, God of Thunder and erstwhile wielder of the mythical hammer Mjolnir, is one of the original band of superheroes called the Avengers who are at the center of the Marvel Cinematic Universe. Turns out it’s handy to have a god on your side when it comes to fighting evil. (Of course, we in the church knew that already).

In Avengers: Endgame, we’re at the culmination of ten years and twenty-something movies. All of the characters (fifty-plus at this point) have come together to fight against this one villain: the evil Thanos, who sees the brokenness of living beings as a kind of blight on the universe. His grand plan is to eliminate half of all sentient life to start again, to give life a chance at not overwhelming the resources of the universe. He thinks this is the only way to save the universe from destroying itself. For years and for ten movies, the Avengers and their fellow superheroes have been fighting against Thanos to stop him from executing this mad plot. They’ve all gathered together and mustered their collective strength to fight him and…with apologies for spoilers, they lose.

Thanos accomplishes his goal, and with a snap of his fingers, half of all beings, including superheroes, simply disappears.
Five years pass. Nothing has changed; the vanished are And the Avengers begin to think to themselves. What was the point? Was it all vanity after all? Did any of it matter?

Thor, the God of Thunder himself takes this failure and loss particularly hard. He isolates himself in (where else?) Scandinavia and falls into a deep depression. He sits around all day wallowing. When the other Avengers have a plan to go back in time to stop Thanos from halving humanity in the first place (it’s complicated), Thor refuses to join them.

What if he fails again? Why even bother?

Now as an aside, one disappointing way that the movie illustrates Thor’s grief and depression is by showing him gain significant weight, spawning many memes about “fat Thor.” Now this is a true reflection of some folks’ journeys in grief and it’s worth depicting, but in this case, it’s played for laughs. So I just want to acknowledge that this is dumb and lazy film-making, that it shames people for how their bodies manifest grief.

In fact, ‘fat Thor’ as a plot device is just another way of getting around how hard it is to process grief at all. Rather than actually talking about what it’s like to lose half of your friends and have to keep living, the audience is supposed to laugh instead. It’s a clumsy device, but an all too human one. What we need to learn is that Thor is broken – sad, angry, and lost to thinking that nothing matters.

He’s basically the writer of Ecclesiastes at this point. All of this superhero-ing was just vanity. Why bother trying again?

Now I think sometimes we’re taught that Thor, or Ecclesiastes, or people in our lives going through such things are just whining. That we’re just supposed to get up, keep going, power through, and those that can’t just aren’t trying hard enough. What a sad thing. Or we’re told that we have to process through our grief before we can get back to how our life was before.

But as anyone who has processed a trauma, or experienced major grief, or felt the fragility of their mortal body can tell you: it’s not an either/or.

What really happens is we accept that we’ve changed, and our lives have changed. And with the help of community, and plenty of reminders that we’re enough, we muddle through, and we decide to try again. The grief doesn’t go away. It doesn’t get fixed. But we take those first brave steps of trying again. Yes, we might fail again. But what if we don’t?

Eventually, Thor says okay, when enough of his friends convince him to try. And without giving too much away, he has an important conversation with his mother (in a different timeline – I told you it was complicated) who reminds Thor that failure, and brokenness, and pain, and joy, are all a part of being alive. That they make us who we are. That there’s nothing to fix. That it’s from within our places of brokenness that our strength comes.

And y’all, I’m as surprised as you are to say this, but that is the Gospel, smack dab in the middle of a Marvel movie. Those are the words of eternal life. That God didn’t come to fix us, that we don’t need to earn Grace, that it is from our places of need that God’s Grace empowers us to love the world. You don’t have to be fixed to help fix the world. You do not have to be good to do good. You simply need to ask for help. Thor’s mistake was thinking he alone needed to be strong. Because when he failed he had nothing left. But that’s not how Grace works. God doesn’t waste anything.

Thor isn’t healed before he tries again and saves the world. His grief isn’t gone. God doesn’t wait for us to be healed before showing us the good She can work through us. It’s in the space of our need that God works.

The writer of Ecclesiastes writes: “It is an unhappy business that God has given to human beings to be busy with.” “I saw all the deeds that are done under the sun; and see, all is vanity and a chasing after the wind.”

He says all this, he’s so sure that all of this God mumbo-jumbo means nothing, has no power, and yet here we are, 2300 years later and learning from him. Here he is, in the pages of Scripture, reminding us that we will have seasons of joy and of grief, and that nothing goes to waste in God’s Kingdom. Rahab was an infamous person of ill repute, and God used her to deliver the entire people of Israel. Martha was devastated at the death of her brother Lazarus, and God used her to give the disciples a safe place to rest.

The prophet Ezekiel is a victim of post-traumatic stress, and God uses him to deliver a message of liberation that gave hope to a people in exile. St. Paul was disabled, and God evangelized the world through him. We are broken, we have places of need, we have failures, and, look around, see what God is doing through us. Not because we succeeded, not because we are good, but just because. Dear Church, The only perfect person God ever used was Jesus Christ.

It is because Thor was able to share his grief that his friends could lift him up so he could try again. That’s it.

And if you hear one message of Grace today, hear this, y’all: God doesn’t need you to be fixed, or healed, and certainly not “good enough” to love you, or to use you to do profound things.

Whatever place in your life needs healing, wherever you are broken, wherever you struggle, even if you haven’t acknowledged it yet, wherever you think is the furthest place from God, that is precisely where God will heal others through you.

Mary Oliver says it better than I:
“You do not have to be good
You do not have to walk on your knees
For a hundred miles through the desert, repenting.
You only have to let the soft animal of your body
Love what it loves.
Tell me about despair, yours, and I will tell you mine.
Meanwhile the world goes on.”

I only take issue with the world meanwhile. The world does not go on despite us sharing our struggles and our fears and our hopes.
The world goes on precisely because of it.

The world does not go on despite broken, healing people working to do good. The world can only go on because each of us broken humans decides to try.

We are called to reach out and journey with those we know who are experiencing life transition or crisis. … END_OF_DOCUMENT_TOKEN_TO_BE_REPLACED

We are now hiring a part-time Children, Youth, and Families Ministries Assistant to join our ministry staff at St. George’s. The … END_OF_DOCUMENT_TOKEN_TO_BE_REPLACED